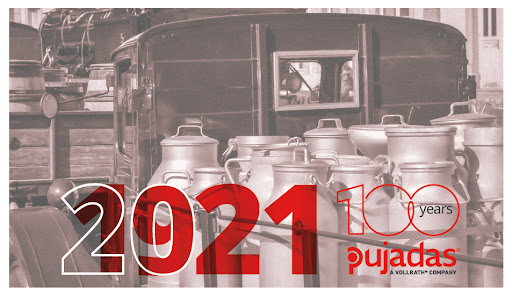 This was the year the Spanish Government made insurance compulsory for all workers, when in Sweden women got the right to vote, Charlie Chaplin released his film “The Kid” and Albert Einstein received the Nobel Prize in Physics; and this was the year Pujadas was founded in Manlleu as artisanal metal workers.

Joaquín Pujadas, even when retired, liked to come to the factory once a week to take tour and say hello to everyone in all the departments in his company.

Sitting in my new office, just after I’d joined, he explained that, in 1921, his father and founder of the company, Miguel Pujadas, manufactured cooking pots and other pastry-making tools in Manlleu.

And that, in the mid-1960s, they developed the drawing and spinning technology, manufacturing products as varied as bicycles, scooters, butane cylinders and milk churns, thus consolidating their industrial spirit.

He also told me that one of the keys to the proper functioning of Pujadas was to get to know the team well, treat them with respect and look after each and every one of them and their families. Today, we continue to believe that the driving-force of our company are the people.

As in other family businesses, the arrival of the new generations prompted a renewal in the products, the range and the customer portfolio. Miquel Pujadas passed his knowledge and know-how on to me, which has turned Pujadas into a solid, robust company. Thank you, Miquel!

A little later, and thanks to the consolidation of the business project and the need for expansion, with the arrival of Andreu Pujadas, the company moved to its current facilities in Girona.

The company made a clear commitment to the Hospitality sector, globalizing even before the concept was coined: manufacturing products in steel, aluminium and stainless steel, developing ranges in plastic and wood to consolidate sales on all continents and being present at promotional fairs around the world, has made Pujadas into the well-known and widely recognized brand that it is today.

And years later, having consolidated a future business model, having repeatedly moved and expanded the facilities, and having left the family structure behind in order to become part of Vollrath, one of the largest leading industrial groups in the Food Service sector, Pujadas continues on the same as always.

A company in constant development that, in difficult times, was able to grow and that in current times, with the restaurant and tourism trade affected worldwide, has been able to be emerge strengthened, satisfying both traditional and avant-garde professionals in catering, hospitality and restaurants.

This year, in 2021, we celebrate our centenary with the greatest investment in machinery ever made as a symbol of the commitment and the future for our customers, suppliers and team.

Thank you to everyone who works in and with the company; without you we wouldn’t be here. Thank you for your support, enthusiasm, patience and understanding in difficult times. Thank you for helping us to turn 100 years old.

Pujadas in Ambiente from 3rd-7th – Frankfurt.